Many Hats Theatre Presents: Of the Fields Lately 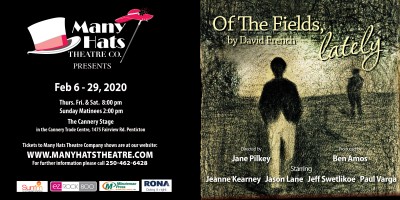 For our first production in our ‘Lucky 13’ season we are pleased to offer you ‘Of the Fields, Lately’ by acclaimed Newfoundland playwright David French. The second in French’s wildly popular Mercer pentalogy premiered in 1973 as a sequel to ‘Leaving Home.’ Since then the saga has been rounded out by ‘Salt Water Moon’ ‘1949’ and ‘Soldier’s Heart.’
‘Of the Fields, Lately’ received the prestigious Chalmers Award for Drama in 1973 and was named one of the 1000 most essential English language plays by Oxford university. It has been produced across North America including a Broadway production and translated into several languages.
‘Of the Fields, Lately’ follows the fortunes of the Mercer family, ex-pat Newfoundlanders living in Toronto. Son Ben (Jeff Swetlikoe) returns after a long absence to attend his aunt’s funeral, only to discover that his father Jacob (Paul Varga)  has recently suffered a heart attack. Ben’s father has been advised not to go back to work, but feels he must provide for his family. Ben is faced with a decision-should he remain and support his family or pursue his dreams in the big city. Jeanne Kearney plays Ben’s mother Mary and Jason Lane rounds out the cast as Wiff.
Again, the complexities of the relationships in this turbulent but close family are revealed. Ben finally realizes that his father has been a profound influence in his life, one that will continue even after his death. The dialogue is idiomatic, funny, and lyrical a true theatrical masterpiece.
Of the Fields, Lately is directed by Jane Pilkey and produced by Ben Amos. Eleanor Walker is stage manager.
Of the Fields, Lately opens February 6  and runs until the 29th. There will be an opening night reception featuring the wines of our official winery sponsor, Play Estate Wines along with tasty snacks from The Nest and Nectar.
The Second Night reception on Friday February 7  will feature the craft brews of Cannery Brewing Company.
Tickets are $25 for adults and $22 students/seniors and are now available on Many Hats’ Eventbrite page accessed here: Eventbrite