Sandra Bullock and her Ocean’s 8 castmates have laid their famous text chain to rest by hosting a “funeral” for their messages.

The conversation became somewhat of a living urban legend because the co-stars couldn’t help but gush about their chats during press interviews on late-night talk shows and red carpets, but Sandra has confirmed the good thing has come to an end after they put the text chain to bed over dinner.

“Because of all the talk, we’ve disbanded it,” she tells USA Today “As of last night at the dinner table, we had a little funeral for it. We all got very paranoid about being hacked: ‘What if we lost our iPhones?’ It was time. It was time to say goodbye.”

Sandra reveals all the stars brought unique chats to the text chain, noting everyone could rely on Hathaway to throw in a “great meme”, while Awkwafina provided “great everything”.

“She’s one of the funniest human beings, in print and in person,” Sandra gushed of the My Vag rapper, before turning her attention to R&B superstar Rihanna’s wise and bewitchingly witty comments.

“(Talking to Rihanna) you don’t think she’s listening because she’s very calm,” Bullock shares. “We get very animated around RiRi and all of us want her to see us. But she’ll be very calm and all of a sudden, she’ll turn and throw something out at you and you’re like, ‘Oooh’. She’s like a sphinx.”

Although the Ocean’s 8 cast developed a strong bond, Sandra admits the shoot was grueling at times.

“We worked long hours,” she says. “We worked 15 hours a day in heels. Half of us have kids, the other half are running major corporations. We were lying in the middle of the floor in a loft in Brooklyn, commiserating, eating meats that Helena (Bonham Carter) was serving us.” 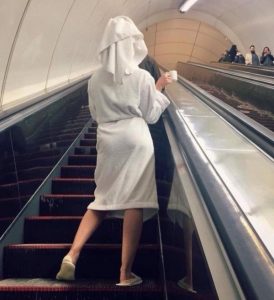